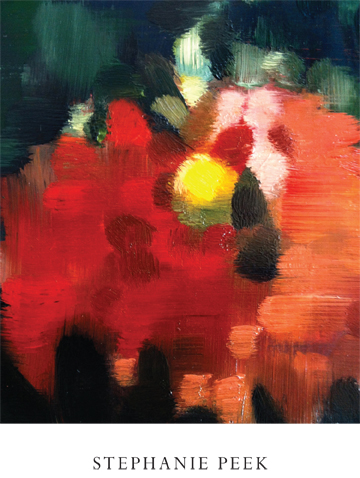 
www.stephaniepeek.com
Posted by Art Alumni Group at 4:29 PM Links to this post 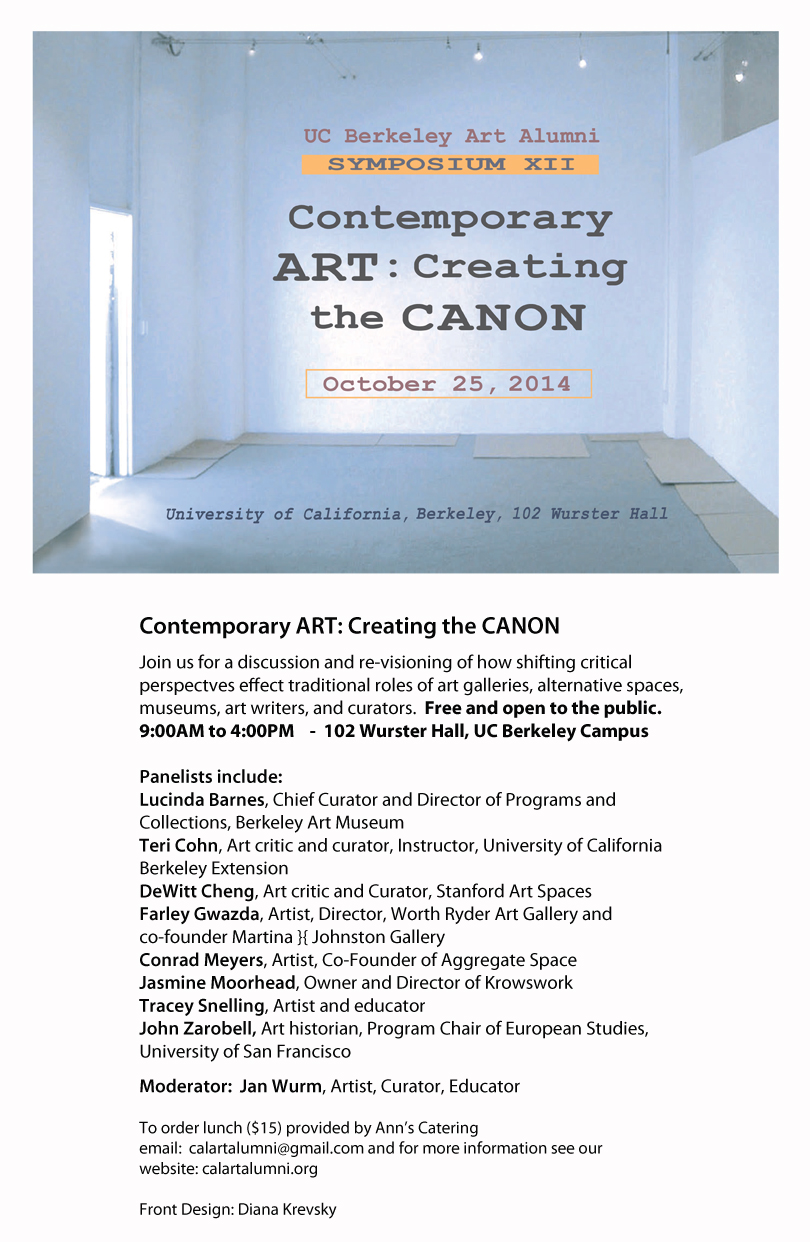 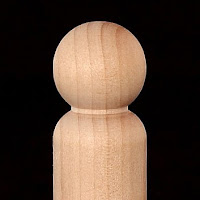 Posted by Art Alumni Group at 8:16 PM Links to this post

As Summer comes to an end, come join us and share
Tales of Travel
Successes of the Studio
and all manner of Planned Projects

Find Out Who will be Participating and
How You can be Involved !

Come and share Your Ideas and Solutions--- New Projects New Shows New Follies --
...and bring a friend !
Posted by Art Alumni Group at 8:50 PM Links to this post

Posted by Art Alumni Group at 5:18 PM Links to this post

Posted by Art Alumni Group at 4:52 PM Links to this post 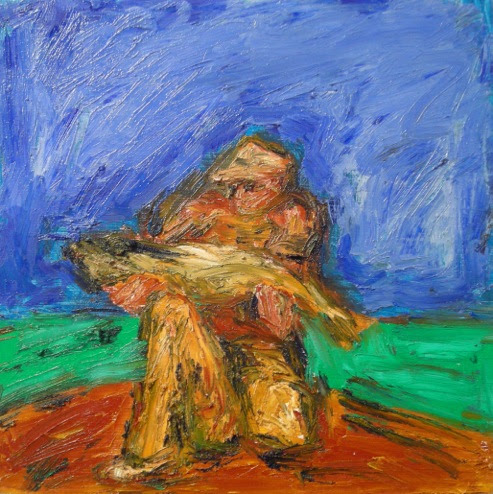 Posted by Art Alumni Group at 4:38 PM Links to this post 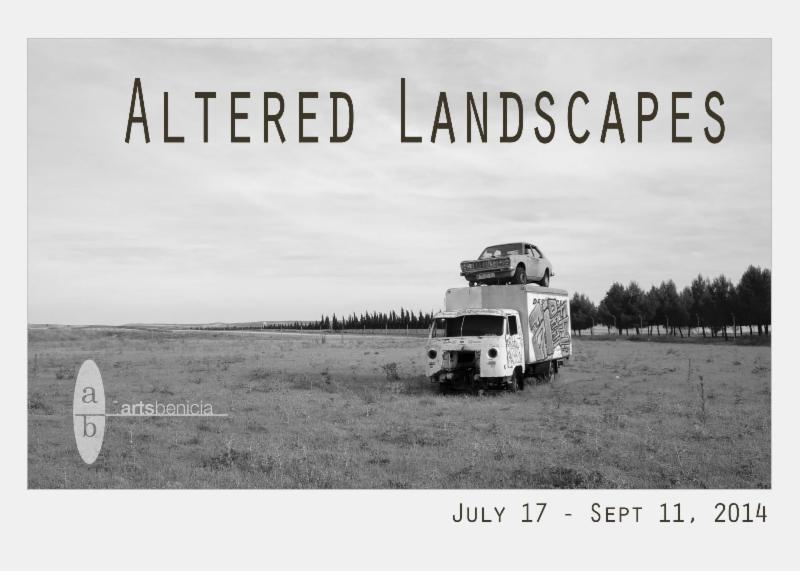 This summer SF Camerawork will host a juried show with the theme: Up All Night.  All artists who submitted work will be included in an outdoor projection series running from sunset to sunrise, July 9 - August 16, 2014.
A select group of works will be chosen by our jurors for exhibition in the SF Camerawork gallery. Jurors this year include: Hesse McGraw, Vice President for Exhibitions and Public Programs. San Francisco Art Institute; Jane Reed, Photographer, Curator, and Documentary Filmmaker; and Judy Walgren, Director of Photography, San Francisco Chronicle.

The 9 finalists selected for exhibition are: Joe Cornett, Amber Crabbe, Louis DeLuco, Christina McPhee, David Pace, Meghann Riepenhoff, Thom Sempere, Kyle Smith, and Jason Tannen.
In conjunction with this exhibition, SF Camerawork will be collaborating with Illuminate the Arts on a public work of art featuring content from a wide variety of arts organizations. We will be providing images from our members exhibition, Up All Night, to be included in a nightly projection on the south facing wall of 1019 Market Street.
Posted by Art Alumni Group at 9:56 AM Links to this post

Posted by Art Alumni Group at 9:54 AM Links to this post

We have just finished our third annual
*** SPRING TRAINING ***
one-on-one mentoring sessions with
some of the most distinguished professionals in the
Bay Area Art Community.

So, come join us for a Meet-Up
to hear about and share
these experiences and insights !

If you had a mentoring session, let us know how it went, what you learned, harvested, gleaned.  And, offer any ideas for next year’s event.

If you were unable to attend Spring Training, join us to ask
questions, offer ideas and raise concerns.

Come and share Your Ideas and Solutions--- New Projects, New Shows, New Follies, and bring a Friend !
Posted by Art Alumni Group at 3:46 PM Links to this post 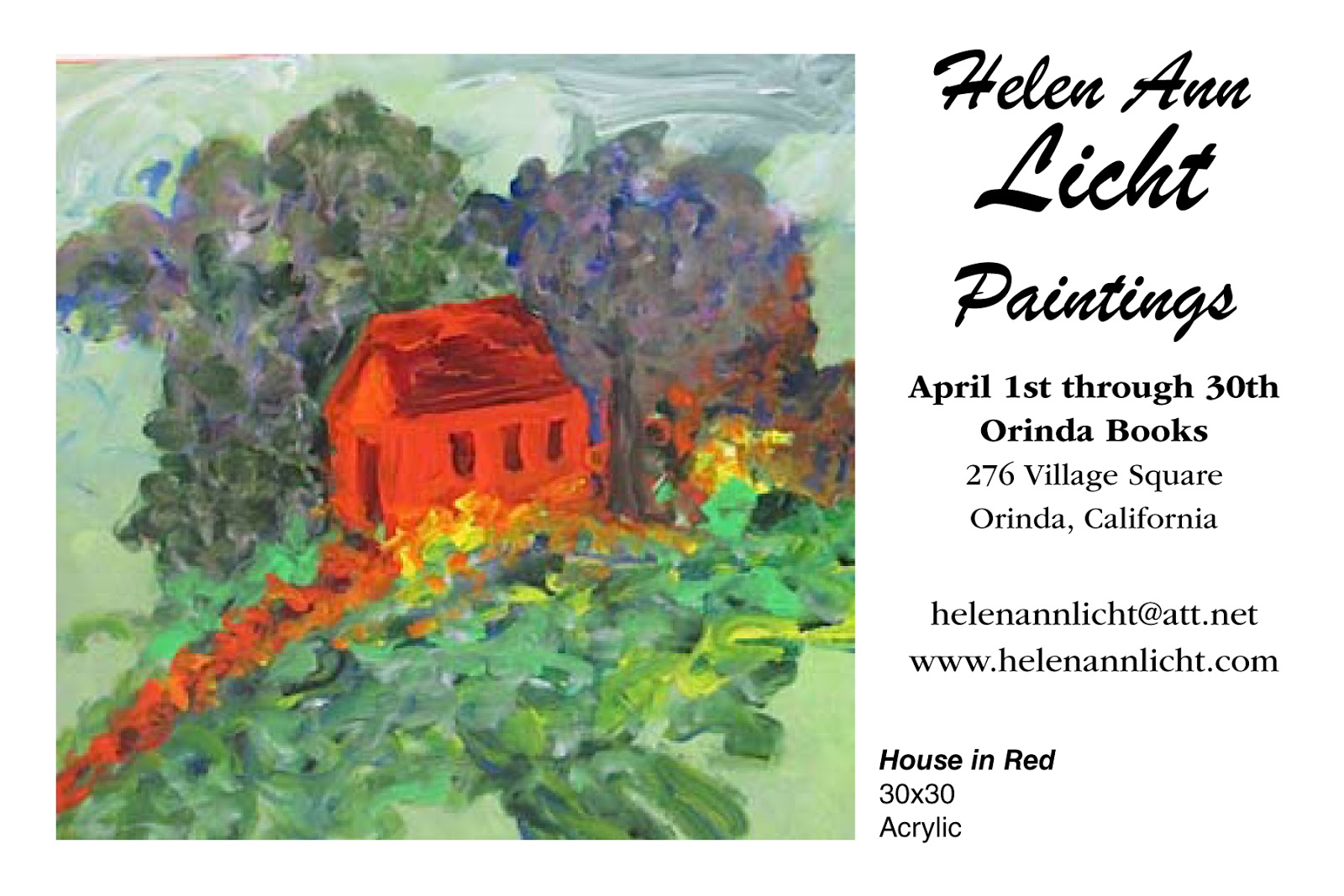 Posted by Art Alumni Group at 11:51 AM Links to this post 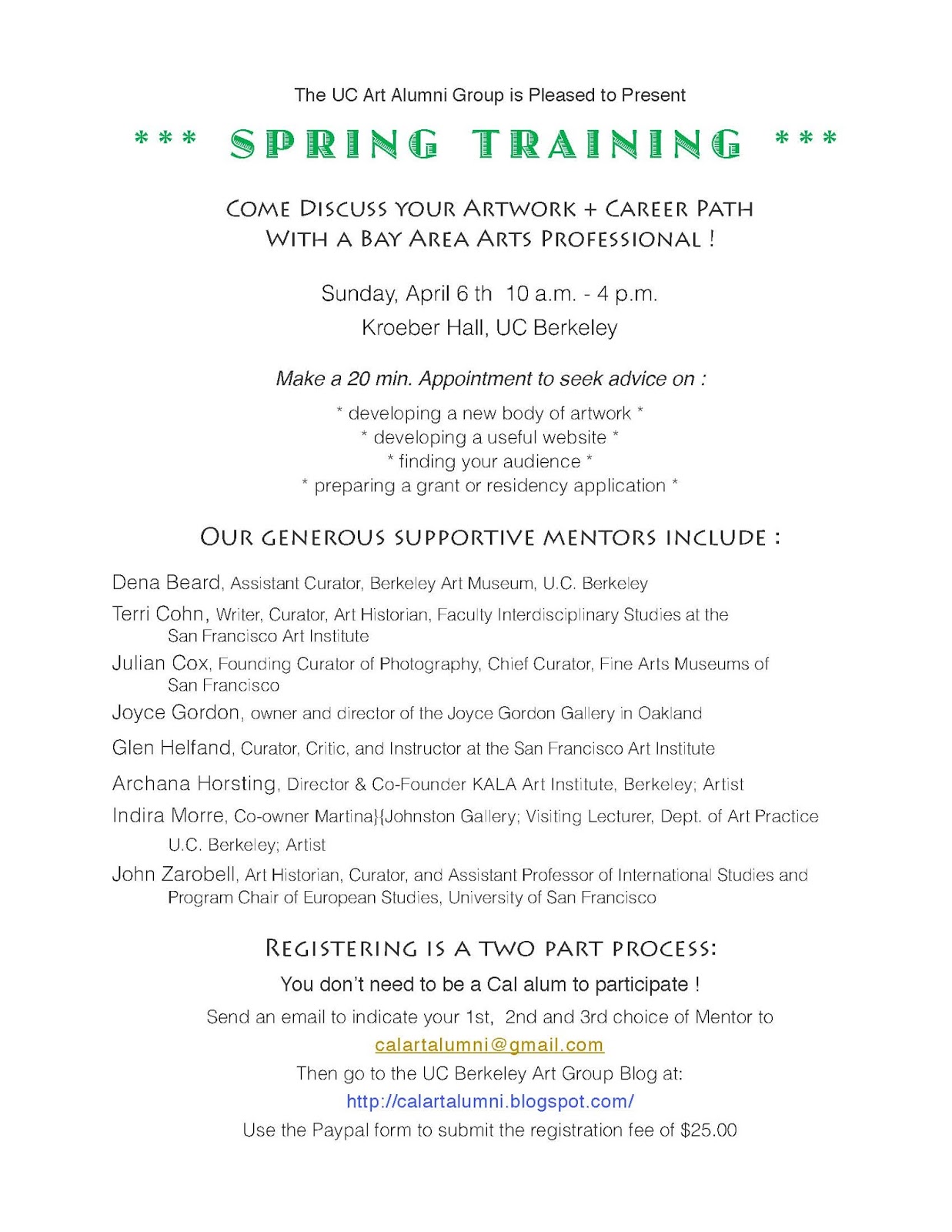 Posted by Art Alumni Group at 11:59 PM Links to this post

Images - the Breakfast Group at the Richmond Art Center 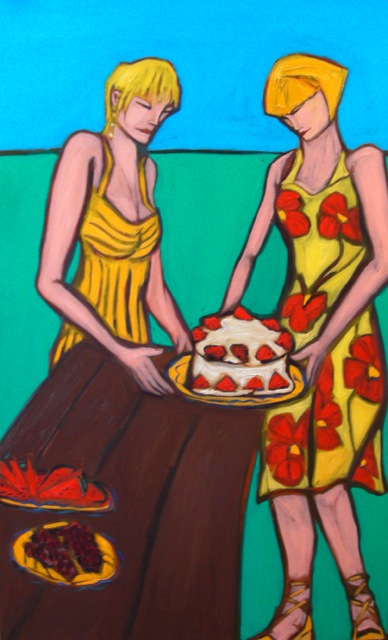 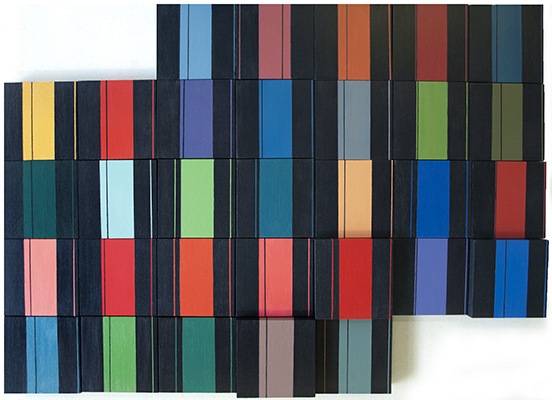 Posted by Art Alumni Group at 2:26 PM Links to this post

The Breakfast Group at the Richmond Art Center Posted by Art Alumni Group at 2:13 PM Links to this post

A line of ink follows the edge of the paper and it is transformed into a place mat, or it traces a path across the paper and it becomes a map, or it forms clusters of marks and becomes a book of knowledge cataloging the wonders of the great highway. And sometimes in this coffeshoptruckstoprestaurant, the paper is heavy and the ink is colorful and a shape is freed from the rectangle and two big circles are punched out for eyes and two small circles are pierced at the edges. The edges are gripped, pulled back, the curve giving shape to the mask needing only a bit of string to transform and give powers of flight or might or magic. Imagination is set free.

“Her Story,” an exhibition at the Stanford University Canter Art Center of the work of Elizabeth Murray, presents an exuberant journey from the flat interiority of the small print to the bursting at the seams thrust into space. Elizabeth Murray took flat paper and a dark palette and proceeded to separate from the page, lift off the surface, curve and crest, twist and shout. The transformation from symbol of the everyday, the ordinary, the common– cup, shoe, dog, fish --- to icon of play, damage, loss, is a conjuring act which Murray performed through scale and raw power.

In the three large works punctuating this exhibition of innovative printmaking we see how Elizabeth Murray forced her paintings to grapple with questions of sculpture --- expansion / compression, inside / outside --- and how she pushed to resolve the demands of sculpture within the parameters of painting ( just leave a blank white circle in the middle of an image and you have an opening to the other side...or at least you would if there were another side). These pieces hang on the wall but the shifts in plane are not painted illusion, they are constructed ramps and overpasses on a huge scale which can make the viewer feel like Alice drinking and shrinking and ready to slide down a chutes and ladders joyride of a board game. Murray shows all: wooden edges, staples, swathes of unpainted raw canvas. And she lets us see the cubism and the surrealism and the pop. Like a magician who lets us see the lining of the top hat and the four sides of the wooden box and the red scarf so that we think we know that this is about seeing the ability to whirl through space or feel the edges or see red. Of course, with the sudden wave it pops out, it appears: what was really there to be seen was the fragility, the constant restless movement, the unparalleled vulnerability.

Elizabeth Murray pushed and pulled her lines and planes and shapes until the work presented itself. When she approached printmaking she pushed her plates and paper in the same unrelenting pursuit. These rich and expansive prints encompass myriad layers and an ongoing renegotiation of border.
As large as these prints stretch, as much territory as they cover, as assertive as they become, what remains a constant pull, an un- severed bond, is that fine line. It is a line which strokes and builds and polishes each form, a line which links each part, a line which clings to the surface and insists on bringing the viewer to the work, up close, indeed up close and personal. It is a mark both obsessive and obsessed. It is a hand both alluring and hypnotic.

In this the Bay Area has an extraordinary opportunity to view an exhibitions of work vested with the personal, the intimate. Whether taking an hour to ride down from San Francisco, or fly up from L.A., the Cantor's current exhibition, “Her Story” and the ongoing San Francisco Museum of Modern Art's “Flesh and Metal,” also mounted at the Cantor, will fill a day of deep viewing. Posted by Art Alumni Group at 9:51 PM Links to this post

Kabbalah/Kabul: Sending Emanations to the Aliens

Sonya Rapoport will be exhibiting her web-based project "Kabbalah/Kabul: Sending Emanations to the Aliens" at Techfest 2014 in Bombay, India from 10 AM, January 3rd - 5 PM, January 5th, 2014.

"Kabbalah/ Kabul: Sending Emanations to the Aliens", encodes altruisms into a form that could be transmitted across interstellar space by radio or laser signals. Emanations are derived from the Tree of Life, the main icon of Kabbalah, in which ten creative forces intervene between the infinite and our created world.

The web narrative, set in the Afghanistan war, opens with an animation of a US helicopter carrying the altruistic emanations into outer space. The image morphs into embryonic stem cells superimposed on a spinning ring of Al Qaeda terrorist cells. When selected by the viewer, each stem cell differentiates into a body part and displays hybrid images of the war in Afghanistan and an altruistic element derived from DNA fusion. A winged Golem catapults the element into outer space to communicate with the aliens, while the Earth-bound viewers absorb the altruistic mantras into their own psyches.

http://www.techfest.org/  |  http://users.lmi.net/sonyarap/kkabul/index.html
Posted by Art Alumni Group at 9:59 PM Links to this post