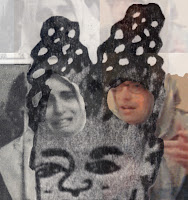 Sonya Rapoport is participating in HAIR-CODE, an activist Vienna Memory Project about Violence Against Women, a first phase of the Holocaust Memorial project.


Hair and hairstyle are seen as a social expression for gender. They play an important symbolic role in human culture.

The image I am exhibiting in The Vienna Project is a digital collage from "(in)AUTHENTIC: Woman, War, Jew", that I created in 2008.

The Vienna Project submission makes use of selected texts by Sigmund Freud, Luce Irigaray, and Jean-Paul Sartre that address gender and anti-Semitism. I correlated the texts with images of Nigerian hairstyles, military tanks, matriarchal mitochondrial genetics, alchemical symbols, and women in violent environments.

During my stay in Lagos, Nigeria in the 90's I visited a beauty shop where I purchased a poster that illustrated available coded hairstyles. Some years later, while I was composing my project, (in)AUTHENTIC, I selected hairstyle "coiled-wire double towers" to represent the double faceted confession of US journalist Jill Carroll during and after her kidnapping in Baghdad in 2006.

In "Image 15" the two-towered hairstyle overlays two different photos taken of her during and after her kidnapping. In one she is crying and pleading to be released from prison. In the other, after her release, but still under control of her captors, she is relating her pleasant jail experience.

Although this digital collage is a part of a larger project with a complex network of interconnected meanings, it conveys an important symbolic role in human culture and power abuse. The "hair-code" of this unusual and suggestive hairstyle may have been decodable in its original cultural context, but in "(in)AUTHENTIC" it is used to suggest a splitting of the personality in a protective response to violence.
Posted by Art Alumni Group at 8:04 PM