Symposium VIII: "Art Inside Out" 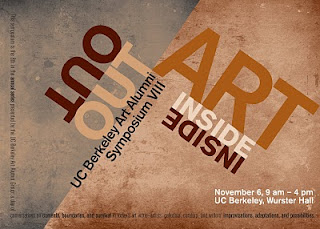 This symposium is the 8th in the annual series presented by the UC Berkeley Art Alumni Group: conversations with artists, gallerists, curators, and writers about surviving in today’s art world with improvisations, adaptations, and possibilities. This year’s symposium will be held in 102 Wurster on the UC Berkeley campus.
To pre-order lunch, use the paypal donate button and specify for lunch. 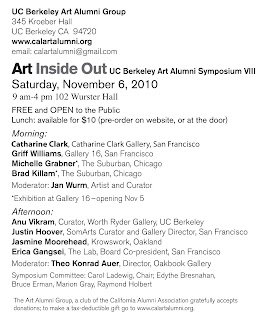 UC Berkeley graduates showing work in a group exhibition called Afterglow: Rethinking California Light and Space at the Wiegand Gallery in Belmont, CA. The show extends from September 23 to October 30.

Exhibited at the Galleri Magnus Aklundh in Malmo, Sweden. April 23 - May 29. Eve teaches in the Creative and Performing Art Center at Princeton.

Earned MFA at UC Berkeley in 1969. The artist has a show entitled Dreaming on Pillow Mountain from September 15 to October 29 at the Galeria Esther Montoriol in Barcelona. Campbell currently divides his time between New York and Barcelona.

Earned MFA in 1972. The artist is showing new paintings at Slate Contemporary Art and Design Gallery in Oakland from September 3 to October 16.

Exhibited work in Perspectives 2010, at the Stremmel Gallery in Reno, Nevada and at the Triangle Gallery in San Francisco

Has work in On View: New Work from Kala, continuously features works on paper by artists affiliated with Kala Art Institute, Berkeley, CA and at Bocanova, in Jack London Square, Oakland, CA.

Received MFA in 1997. The artist released his book Good Cop/Bad Cop and held a show of photographs with the same name in July at the Ever Gold Gallery in San Francisco. His gallery, LINCART, participated in new San Francisco Art Fair, at Fort Mason, May 20 thru May 23.

Former Faculty has work in Gifted Hands: The Fine Art of Craft at The Hearst Art Gallery, the Museum of Saint Mary’s College of California

Directed a film, "Women Without Men". She co-wrote the screenplay with her husband. "This visually transfixing film, which originated as a video installation, has the feel of an exhibition of Ms. Neshat's work whose figures have stirred to life to play out a tragic feminist allegory."

Former chair of and associate professor in the Painting department of the San Francisco Art Institute. Earned BFA at Carnegie Mellon University and MFA from UC Berkeley. Reichman had a solo show entitled Simulations at the Paule Anglim Gallery in San Francisco in September 2010.

Senior member of the Art Practice Department. Showed a new body of work, Healers from the Yelling Clinic, at the Paule Anglim Gallery from September 1 to September 25.

Was one of 14 sculptors and architects included in the First Site-based Art Exhibition Conceived for a National Park, which opened yesterday at the Presidio in SF. It will run until May 15, 2011.

Exhibited her work at the Photo-Eye booth at Art Chicago 2010.

One of the twenty artists who meet for conversation once a week at the Café Van Kleef in Oakland. The City College Art Gallery in San Francisco will be showing their work from September 29 the October 28.

Has been awarded a Guggenheim fellowship.


Sonya Rapoport and Fred Martin interviewed for posterity!  You could learn a lot from these amazing artists. check it out.